The Outback has proven to be a reliable and durable family vehicle over time. However, there are Subaru Outback lemon years of production you should steer clear of.

The Subaru Outback years to avoid are 2013, 2011, 2017, 2018, and 2019. These are the worst years. They have shown a high frequency of transmission problems, engine issues, battery failures, and other general complaints that make them significantly less desirable than other years of production.

This article will explore the worst years Subaru Outback vehicles have experienced and the common issues associated with each. I’ll also offer some alternative Subaru Outback year comparisons so you can find the right one for your family. Finally, I’ll briefly explain how you can address these issues should they arise in your vehicle.

The 2013 Subaru Outback, the fourth generation of the popular crossover SUV, has had several issues reported by car owners. These issues range from minor annoyances to serious problems that can affect the performance and safety of the vehicle.

Oil consumption is one of the major issues reported with this generation of the Outback. Since the piston rings couldn’t seal properly, oil leaked into the combustion chamber, forming carbon deposits that strain the engine. This increased oil consumption and decreased fuel economy, forcing owners to change their engine’s oil much more frequently than normal.

Another problem reported by 2013 Outback owners is the failure of the continuously variable transmission (CVT) system. Reports of torque converter problems were common, leading to significant transmission damage and repair costs.

An official lawsuit was filed against Subaru in 2014 related to oil consumption in the 2013 Outback. The company acknowledged that the 2013 model year had an issue in the design of its piston rings and agreed to a settlement to pay out damages to customers who experienced excessive oil consumption.

Although the 2011 Subaru Outback was generally reliable and durable, a few issues have made this model year dangerous.

One of the most concerning issues was a problem with the power steering system. Reports of sudden and unexpected power steering failure were common, leading to difficulty turning and increased risk of accidents. These failures were caused by a faulty power steering pump, which had to be replaced to fix the problem.

Aside from the power steering issue, some owners reported transmission failure. In many cases, the transmission would suddenly and unexpectedly stop working, leading to dangerous driving conditions and costly repairs.

Furthermore, there were reports of the engine frequently stalling without warning, leaving drivers unable to control the vehicle and potentially creating a safety risk.

The 2017 Subaru Outback has had several reported problems that can affect the performance and reliability of the vehicle. The most common issues experienced by car owners are dead batteries, cracked windshields, and the touchscreen radio freezing up.

Dead batteries were reported by many 2017 Outback owners and were often due to a faulty alternator. This issue can cause the battery to drain, leading to difficulty starting the vehicle and decreased performance.

Cracked windshields were also reported by a number of drivers, with many reporting that the cracks seemed to form on their own without any external impact. This can be a safety hazard, as cracked windshields make it harder to see out of the vehicle and can lead to an accident.

The touchscreen radio was also a common source of frustration for many drivers. The screen would freeze up and become unresponsive, rendering the system useless and eliminating the ability to control audio settings or access navigation.

While you’d expect the 2018 Outback to be an improvement on previous models, there are still a few problems that this model year was reported to have.

For starters, the battery drains much faster than you’d like. This issue can be caused by faulty electrical components and lead to a dead battery, decreased performance, and difficulty starting the vehicle. Customers have had to replace the battery several times to fix this problem.

In addition, some owners have reported issues with the steering system. Many drivers experienced their car unexpectedly pulling to one side while driving. This issue can be extremely dangerous if not appropriately addressed, as it can lead to an accident.

Furthermore, some owners have experienced windshield cracking without any external impact. This is a great cause for concern, as cracked windshields make it harder to see out of the vehicle.

Despite being one of the newer model years, the reliability of the 2019 Subaru Outback has been called into question due to some reported issues of certain parts failing or malfunctioning.

One major concern was the windshield, as many drivers reported cracks, dents, and other damage appearing on their windshields without any external impact. The windscreen can become weakened and more susceptible to damage if the cracks are left untreated, leading to decreased driving visibility and a potential safety hazard.

Unintended acceleration has also been reported by several drivers. Many 2019 Outback owners have experienced their vehicle suddenly accelerating without them pressing the gas pedal. The accelerator becomes stuck in an open position regardless of how hard the driver presses down on the brake pedal, causing sudden surges in speed.

Dead batteries have also been an issue for some owners. Faulty electrical components can cause the battery to lose power, making it difficult for the car to start and leading to decreased performance. Many drivers have found themselves stranded after the battery drained completely, unable to start the vehicle. This can be especially dangerous if you’re in a remote location or in bad weather. 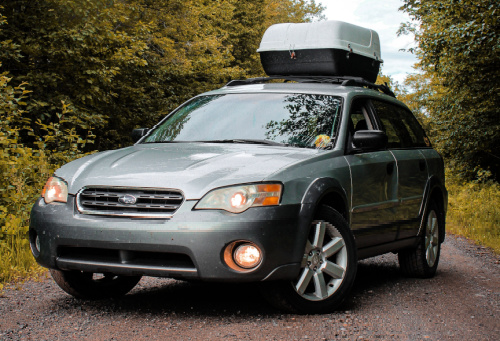 While you should avoid the above-mentioned model years of the Subaru Outback, there are still other years that have proven to be reliable and dependable.

Being the newest model year, the 2022 Subaru Outback is packed with upgraded features and improvements. Subaru has taken the feedback from previous model years and addressed those issues for this year, ensuring that this is one of their most reliable models yet.

It also offers a unique Wilderness variant with higher ground clearance, better suspension, and all-terrain tires. This model is perfect for drivers who want to take their Outback off-road and explore the wilderness while still having a reliable, dependable car that won’t disappoint them.

The 2021 model year of the Subaru Outback has been praised for its reliability and dependability. Many drivers have had good experiences with this car, with only minor issues reported.

This model year saw a few improvements from its previous iteration, such as adding adaptive headlamps, a rear-seat reminder system, and a warning light for the passenger seat belt. The exterior design was also revised with a newer and more aggressive look.

You can still find great deals on the 2014 Subaru Outback, as it’s one of the older model years. Despite its age, this car offers reliable performance, with few reports of significant problems.

The 2014 Outback has a sleek, modern exterior design and offers plenty of cargo space, making it an excellent choice for those who need room to haul their gear. It also provides impressive safety features and improved fuel economy compared to the newer model years, so it’s a great option for those on a budget.

How To Fix Subaru Outback Issues

Suppose you currently have a Subaru Outback model that belongs to one of the lemon years mentioned above. If you don’t want to replace it entirely for any reason, what are your options?

Repair the faulty part. It’s possible that the issue can be fixed with simple repairs. For example, if the power steering pump is failing, you may want to check the condition of the power steering fluid first before investing in a new pump. The solution may be as easy as replacing the fluid. If you’re in doubt, you can always contact a professional for advice.

Replace the faulty part. Let’s say you end up with a model that tends to have a cracked windshield, but the rest of the vehicle is fine. In that case, you may only need to replace the windshield with a compatible one from an authorized Subaru dealer. Make sure you check out reviews so you can be sure you won’t replace that part again anytime soon.

If All Else Fails – Get a New Vehicle

Replace the car. If the issues are causing you more trouble than they’re worth, you have no choice but to get a new vehicle. We’ve already outlined some of the better model years above. Of course, if you experience any problems even with these newer models, you shouldn’t hesitate to report them — not only for your sake, but also for other potential drivers.

In any case, it’s important that you address any issues with your Subaru Outback as soon as possible. The longer you allow them to fester, the more likely they are to become more serious and endanger yourself and the people who ride with you.

Up Next In Off-Roading:

Which Honda ATV is the Most Reliable?

How do I get My Jeep out of Anti-Theft Mode? (step-by-step)