Electronic instrument panels have seriously evolved over the last decade, going from a boring, analog-like existence to fully virtual, as bright and vibrant as some of the best smartphone displays.

While most Jeeps lack a virtual dashboard (Digital Dash), you can still get one, thanks to a product called CaRobotor.

Currently, the only Jeep that comes with a factory-installed, Digital Dash is the Jeep Compass Trailhawk 4×4. The 2023 model followed the 2022 overhaul, including a far more modern interior, in terms of technology, which includes the digital dash. 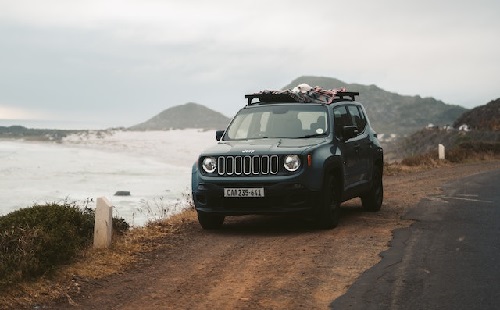 Virtual dashboards aren’t very common in gas and diesel-powered vehicles, at least not right now. They are far more common in all-electric vehicles and some of the various hybrids out there. Seeing them in a gas-powered vehicle is a nice change from the standard interior aesthetic we’ve all grown accustomed to.

What is a Digital Dash?

Known primarily as a virtual dashboard, there is nothing really virtual about it. You can reach past the steering wheel and touch the screen, after all. It simply means that the entire dashboard, including the speedometer, RPMs, and other readouts that come standard on the dash cluster are all displayed digitally.

Believe it or not, digital dashboards have been around since the 1970s and lasted until the 1990s before they were phased out due to a general lack of interest and the enormous cost added to the overall price of the vehicle.

Today, manufacturing a digital dash is nothing, akin to making a simple display screen on an Apple iPhone, with an even simpler computer that relays real-world information to the display for the driver to see.

They’re fairly cheap to manufacture nowadays and it’s kind of a mystery as to why we don’t see more of them on the market. It’s as if they are entirely reserved for electric vehicles and hybrids. Of course, the addition of a digital display on the 2022 and 2023 Jeep Compass is a breath of fresh air and a step in the right direction.

That’s not to say there is nothing digital in any Jeep or other comparable vehicles. In some of those models, there are aspects of the dash that are entirely digital. However, an entirely digital dash has been out of the question until now.

Why Did Jeep Go with the Digital Dash for the Jeep Compass Only?

Jeep Grand Cherokees dominate the Jeep Market, followed by the Wrangler, Wagoneer, and Gladiator. Maybe Jeep felt like a change in the Jeep Compass was long overdue, since the massive overhaul in the Compass’ interior aesthetic in 2022.

Whether Jeep decides to go with all-digital dashboards in the future remains to be seen and some of that might depend on how well the 2023 Compass sells.

Can You Replace the Jeep Dash with a Digital Dash? 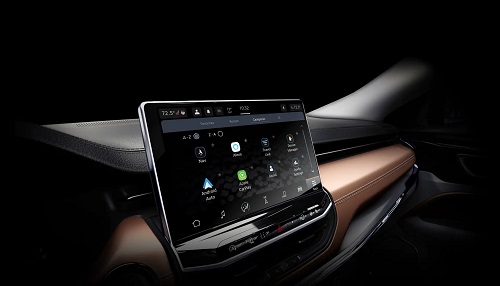 They include vent lights and LED lighting with many of their virtual dash offerings as well. For whatever reason, Jeep owners are particularly infatuated with CaRobotor and the discussion forums are rife with examples of Jeep owners taking the plunge and replacing their entire dashboard.

According to CaRobotor, its entire business model is focused on dashboards and they produce digital dashboards for a wide range of vehicles, including more makes and models than just Jeeps.

The boot speed of the JK Model is three seconds and the digital dash covers the entire array of informational operations on the Jeep Wrangler. This includes the four-wheel drive feature as well.

Better yet, the driver gets full customization control over what’s displayed on the digital dash, with options to change the RHD, LHD, MPH, PSI, BAR, and odometer displays. The JK Model comes with five modes to select from.

The design is plug-and-play as well, meaning that once you remove the original dashboard, the new CaRobotor digital dash should plug in and fit right back in like nothing was ever taken out. You won’t find yourself cutting up plastic to make extra room for the new display.

CaRobotor’s J Max Dashboard is designed to fit a wide array of Jeep models, including Jeep Wrangler, Gladiator, Rubicon, Sahara, and Sport. This is a full dashboard replacement that comes in deep, glossy red, so it matches up best with black or gray interiors. 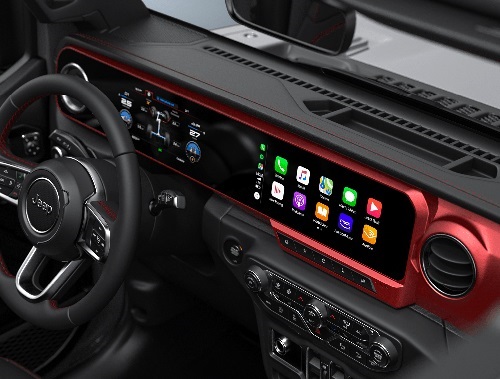 Like the JK Model, the J Max is plug-and-play, streamlined for fast replacement. Once the old dash is out, the JK Model should plug in and fit it like a glove. The JK Max also comes with the 5 modes—highway, rock, snow, mud, and sand.

The J Max fits all Jeep models listed above for the years 2018 through 2022. It probably won’t take much to fit the 2023 models but with some recent overhauls in some Jeep models, it may take CaRobotor a  little while to catch up.

The K1-B version requires a little more work to install. It’s compatible with the Jeep Wrangler, of course, but if you have replaced the original amplifier, it will require at least a portion of your own setup to make it work.

Last but not least, if you spend an extra $40, you can add the Batman camera cover for the backup camera and $50 will net you a cover with the addition of RCA cables.

CarRobotor also sells several of its products as combos. If you aren’t interested in a whole dash replacement or if CaRobotor doesn’t have a whole dash option for your specific Jeep Wrangler, you can combine the J Pro and the K1 Radio.

Including both will provide you with a sizeable overall discount. You get the instrument cluster digital dash, the digital radio, a backup camera, the covers, and four vent lights in the complete package.

The rest of what CaRobotor offers is for non-Jeep vehicles, such as the Toyota FJ Cruiser and various Nissan models. However, most of their products revolve around Jeeps.

Other Digital Dash Options for Jeeps

Unfortunately, there isn’t much on the market in the way of digital dashboards, specifically for Jeeps. CaRobotor seems to be the one company that’s really in the tank for Jeep and, since Jeep hasn’t embraced the Digital Dash beyond the Compass, CaRobotor is the way to go.

The problem is, there aren’t many companies to choose from and what they have to offer is lackluster at best. The above options from Intellitronix represent the best of what the industry has to offer outside of CaRobotor.

The other options are essentially for Jeeps that are converted into racing vehicles and the kinds of aftermarket modifications that make the Jeeps no longer street worthy. If your Jeep doesn’t have a virtual dashboard, your best option will most likely be CaRobotor.

If you jump online for a quick look, you will see there are a number of different companies offering virtual dashboards or digital dashboards for Jeep Wranglers (its almost always Jeep Wrangler), however, dig a little deeper and you will find that the product is a CaRobotor product.

On the bright side, with virtual dashboard displays spread out that much, you are bound to find some good deals on a new CaRobotor Digital Dash. These dashboards are popular enough that CaRobotor is able to sell them through a wide variety of different vendors.

The Jeep Compass Trailhawk 4×4 comes with a completely digital dashboard. However, digital dashboards haven’t spread much further than this singular Jeep vehicle. Fortunately, CaRobotor has some excellent options you can jump on if you’re really looking to upgrade your Jeeps dashboard.

Jeep Touch Screen Not Working Issue: How to Fix it?

How to Upgrade Dash on Jeep JK? (Cost, Explained)

How to Upgrade Instrument Cluster on Jeep JK? (Explained!)